As you can see from the images above, both dishwashers are slick and have a modern design to them. However, the stainless steel Bosch dishwasher is perhaps more standard with a fairly common design, compared to the GE product with its stylish black exterior and touchscreen display, making it look more modern and boasting simplicity. GE also manufactures this product in white and stainless steel. 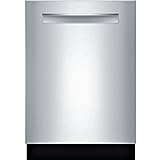 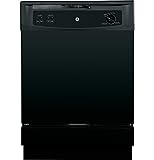 In modern households, when it comes to appliances, bigger isn’t always better. A lot of people now prefer thinner, slicker gadgets because they are perhaps more pleasing to the eye, and they also save a lot of space.

Both products are advertised as 24” wide, but the dimensions differ slightly in both. The Bosch dishwasher measures at 23.8 x 23.6 x 33.9 inches, while the GE Spacemaker is 28 x 26 x 36 inches, making it the slightly bigger of the two.

In terms of weight, the Bosch weighs in at 101 pounds, making it much heavier than the GE dishwasher which is just 60 pounds. This shows that while the Bosch is slightly smaller, it’s perhaps bulkier and much heavier, and though the GE Spacemaker is a little larger, it’s much lighter.

When buying a dishwasher, one thing that is crucial to know is how much space there is inside. Before, we mentioned that people generally opt for slicker appliances, but this usually means they’re thinner as opposed to being bulky. In products like dishwashers, it’s still important that the inside of the dishwasher is spacious, so you can get the most out of each cycle. Although Bosch doesn’t specify exactly how much can be loaded into their dishwasher, they have a third rack which offers ‘30% more loading capacity’ compared to their standard dishwashers with only 2 racks.

This product also has a feature called ‘RackMatic™’, which lets users adjust the upper rack to create 9 different positions and 3 different heights to suit everybody’s needs. There are 5 different cycle options, but if you don’t have a lot to wash, they also offer a ‘half load option’ for smaller loads which is quicker and also saves energy and water.

The GE Spacemaker earns its title because it has a removable upper rack that can be taken out to make more room if needs be. Although the upper rack doesn’t appear to be adjustable, they boast that their lower rack is deluxe, with a ‘deluxe silverware basket’, and they also provide 5 different cycle options depending on your needs.

Obviously all dishwashers have the basic ability to wash dishes, but they also have their own individual features to make them stand out amongst all of the other products available. These features are what make each dishwasher unique, and different features will appeal to different types of customers.

The Bosch dishwasher stands out because of its adjustable third rack, but it also has an ‘AquaStop™’ system which detects, prevents and stops leaking from occurring, and this works 24/7 and can turn itself on.

It also has a detergent tray which ‘optimizes detergent dissolving’, as well as a ‘sanitize’ option for deep-cleansing at higher temperatures, and an ‘ExtraShine™’ option which combines extended drying time and a high temperature to make dishes and glassware especially shiny.

The amount of energy used

A misconception about dishwashers is that they use a lot of energy, and this can put a lot of people off from buying them. However, dishwashers have actually been proved to be more energy-efficient compared to washing dishes by hand, at least when they’re used responsibly.

A lot of dishwashers are kitted with energy-saving functions and options in order to be more sustainable. Many dishwashers, including the Bosch SHE65T55UC, are Energy-Star certified, which is an approval that the product is energy-efficient.

As well as being Energy-Star certified, the Bosch dishwasher comes with an EnergyGuide which tells you how much energy your appliance will use each year and roughly how much it will cost per year as well.

The GE Spacemaker isn’t Energy-Star certified, but it does also contain an EnergyGuide informing customers on how much energy it will use, and the approximate annual cost. These prices are close to the average cost of similar models, perhaps slightly higher.

One thing about older dishwasher makes that puts a lot of people off is the noise: the loud rumbling that makes the whole house shake. Over time, dishwasher manufacturers have tried to reduce the noise created by their products as much as possible, and the sound is measured in decibels (dBA).

The Bosch SHE65T55UC claims to be amongst the ‘quietest dishwashers’ with just 44 dBA, making it quieter than the GE Spacemaker which is 64 dBA. However, GE have also installed a ‘Quiet Motor Valve’ and a ‘QuietPower™ Motor’ to reduce noise further.

Prices of dishwashers may seem high when you buy them, but research has found that in the long-run, dishwashers can actually save more money from your water bill than if you were to wash up by hand. For this reason, many argue that the higher pricetag shouldn’t prevent you from investing in a dishwasher, because the benefits are worth it.

Proceed to amazon to see current offers and possible discounts for each model:

In conclusion, while both of these dishwashers have some attractive qualities, it completely depends on your personal tastes and requirements. In terms of appearance and price, the GE Spacemaker may just beat the Bosch SHE65T55UC with its slick, lightweight body in a simplistic black colour with a touchscreen display.

While the GE Spacemaker can create more room, the Bosch has an adjustable third rack which has 30% more loading capacity, and there generally seem to be more beneficial functions that make it stand out from other dishwashers.